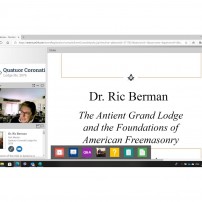 ‘The Antient Grand Lodge and the Foundations of American Freemasonry’.

The influence of the Irish in America is identified today with the more than four million Southern Irish immigrants, mainly Catholic, who dominated nineteenth and twentieth-century migration.  But the pattern in the eighteenth-century was different – and fundamentally so.

Dr Ric Berman tracks the impact of the c. 350,000 Scots-Irish and London Irish who migrated to America between 1730 and 1800, settling in Pennsylvania, West Virginia, the Piedmont (western North & South Carolina), and the emergent states of Ohio, Kentucky & Tennessee.

This wave of migration was instrumental in introducing Antient Freemasonry to America and blending it with English – ‘Moderns’ – freemasonry.  And the influence of the Irish remains in place today.