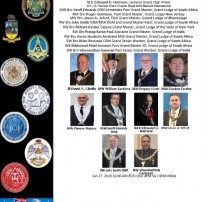 Today the MW IPGM Bro. Plamen Mateev participated as a guest speaker in the 3rd International Masonic Town Hall. This international conference was held online due to CoViD-19 and was planned and organized by The Grand Lodge of the State of New York, Scottish Right Northern Masonic Jurisdiction, Grand Lodge of Manitoba (Canada) and the Grand Lodge of South Africa. In the Conference participation took over 150 Brother Masons from 20 Grand Lodges worldwide.

A few statistics for this edition includes representatives from

The questions raised and asked to the MW IPGM Bro. Plamen and hist answers:

Is the Royal Arch Active in your Grand Lodge and if so what is the relationship between the two structures (Grand Lodge and York Rite/Royal Arch) in various jurisdictions?

The Grand Lodge of Ancient Free and Accepted Masons in Bulgaria voted in favor of the proposal to implement the Royal Arch. We have a committee of Brethren who are working on the implementation of this decision. We have almost 25 years history after the consecration of our Grand Lodge and this is not enough time to implement all the bodies in a Grand Lodge Masonic family. However we do have since the year 2000 the Supreme Council of 33rd degree of the Ancient and Accepted Scottish Rite, installed by the Southern Jurisdiction and the Supreme Council in Orient NATO. Also we have signed an agreement with the Grand Orient of Italy for the development and implementation of the Memphis-Misraim Rite.

Masonic Passports. I am sure that some of you are familiar with the App, Amity International, however before and since there was and is the Masonic Passport, which Brethren traveling internationally carry with pride and look back fondly on where they have been. This can also be used locally as a measure and incentive for Masonic progressing to ensure more visits to lodges and perhaps one can look at how in the time of COVID-19 the same applies. Does your Grand Lodge use the Masonic Passport

The bylaws of the Grand Lodge of Ancient Free and Accepted Masons in Bulgaria define 2 types of Masonic identification. The first one is Masonic Passports that are almost equal to the state issued international passports for all citizens wishing to travel abroad. The second type of identification is linked to the Master Mason’s certificate that is a one-time issued document. With it we have an annual Masonic ID plastic card with QR code and 3-D hologram sticker for authenticity, confirming that the Brother has paid his membership fee and he is in good standing for the current year. By using these IDs we participate currently in all initiatives by the Grand Lodges of California, British Columbia and Yukon, Kentucky, New York, State of Georgia, England and other. After our participation in the Annual Meeting of the Masonic Communities & Services Association we have proposed the implementation of the Amity International mobile application in our jurisdiction.

Road Map to re-opening Lodges worldwide COVID-19 took us all by surprise and we all responded as we do in times of war and crisis and went into recess until we are able to open and operate safely. We are watching how countries are reopening their economies, some ever mindful of a possible second wave. Based on conditions in your country, when are you likely to reopen and how will you do this? Will it be a phased approach or all at once.

Post Pandemic – Managing the influx and backlog of candidates After every great calamity, World War two being case in point, we see an increase in membership. Some Lodges already have a backlog of candidates for initiation. Lodges meet once a month. Scottish Rite and Royal Arch meet four times in a calendar year. What contingencies have you put in place to deal with this backlog and possible influx to ensure that you do not lose these candidates?

The Grand Lodge of Ancient Free and Accepted Masons in Bulgaria is also in a bad shape in terms of schedule of events, as well as the work that is to be done for the education of candidates for the THREE degrees. Our Grand Lodge however, started online activities through its website for the education of all candidates as well as every day spreaD of information about the ability to participate in international freemasonic online activities, as mentioned in the previous answer. Ritual work is on PAUSE. Education is NOT on pause. Education has EVEN INCREASED. The face-to-face work is in a SERIOUS delay. Some lodges have STATED that after the restart in September, they will have TWO TIMES monthly meetings in comparison with the ONE time monthly meetings prior to CoViD 2019.

What does a Post-Pandemic Global Masonic Fraternity look like? – Lessons learned If anyone had told me when we went into recess in December of 2019 that 2020 would be a write-off, who would have believed it. We have made the best of a bad situation, by reaching across the divide with online meetings such as this. As soon as we are able, are we likely to see visits between the United States and Canada, between States? Or a lodge visit between India and South Africa, with a game of cricket? Are we likely to see friendships flourish and by extension, will online meetings like this remain a part of the Masonic mix, for education and social interaction?

The Grand Lodge of Ancient Free and Accepted Masons in Bulgaria learned its lessons from the CoViD 2019 situation. Currently the freemasonic society is not the group that leads the social society. We believe that the concept for future development will lead to rearrangement of the current norms and articles that lead to discrimination and racism. Every attempt to DIVIDE FREEMASONRY by views that are not part of the ANCIENT LANDMARKS will surely lead to the catastrophe of the concept for freemasonry. We support and will give a Brotherly hand for the initiatives like Masonic Medical Research Institute (GL of New Work), The Masonic Emergency Response Team and The Civility project (GL of California), Cancer Car Program (GL of British Columbia and Yukon). The online activities should continue. We accept the physical distancing but do not accept the social distancing.