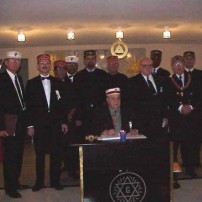 Freemasonry has been well received in Bulgaria.

In April 2000, Sovereign Grand Commander C. Fred Kleinknecht, 33°, received a letter from the Grand Master of Bulgaria, M.W. Ivan Stavrev, requesting him to form a Scottish Rite Supreme Council in Bulgaria. As an initial step in fulfilling this request, Ill. Kleinknecht asked Ill. Robert W. Woodward, 33°, Deputy for the Orient of NATO Bases, to coordinate efforts that would result in the conferring of the 4th through the 32nd Degrees on those Master Masons that the Grand Master of Bulgaria recommended.

The Grossloge A.F.u.A.F. von Deutschland (The Grand Lodge A.F.& A.M. of Germany), within The United Grand Lodges of Germany, had assisted the Grand Lodge of Bulgaria in re-establishing itself in 1997. Therefore, Ill. Kleinknecht contacted Sovereign Grand Commander Hubert V. Koop, 33°, Scottish Rite Supreme Council for Germany, and informed him of the request from the Grand Master of Bulgaria and his own willingness to accommodate that request.

Ill. Woodward commenced planning for this great event by tasking his American Military Scottish Rite Bodies (AMSRB) in Frankfort, Germany, to prepare to confer the Degrees on the Bulgarian Brothers in Sofia, the capital of Bulgaria. He met with M.W. Stavrev at the Chateau St. Anne in Brussels, Belgium, on April 6 to accomplish this goal and was asked to provide two seminars in Sofia about American and international Masonry. Ill. Woodward asked Ill. Donald L. Saint, 33°, Deputy Grand Master of the American Canadian Grand Lodge (ACGL) and the author of this article, to give those presentations. He enthusiastically agreed.

Preparations commenced immediately. Ill. Saint telephoned the Masonic Service Association/Masonic Information Center (MSA/MIC) and Masonic Renewal Committee of North America (MRC) and purchased all necessary brochures, booklets, and pamphlets on Freemasonry. He also copied more than 30 Masonic videos into the PAL system used in Europe (as opposed to the NTSC system used in America) and about 12 diskettes and two CDs of Masonic graphics and data, along with many other educational materials to be presented to the Bulgarian Brethren.

The General Secretary for the AMSRB, Ill. Charles E. Glidewell, 33°, and Ill. Saint selected the members of the Degree Team and packaged the equipment, materials, and presentation items necessary to make these efforts successful. Unfortunately, Ill. Glidewell was unable to accompany the Degree Team due to ill health.

On July 1, 2000, a Degree Team composed of Brethren from the American Military Scottish Bodies and the American Canadian Grand Lodge conferred the Scottish Rite Degrees on 34 Bulgarian Master Masons in Sofia, Bulgaria. Ill. Bros. Woodward and Guia arrived in Sofia on Wednesday, June 28th, and met with the Grand Master and others preparatory to the arrival of the Degree Team on Friday, June 30th. The Degree Team had two purposes. The Team’s first purpose was to confer the 4th through the 32nd Degrees of Scottish Rite Freemasonry on 35 Bulgarian Master Masons. Its second purpose was to make two presentations about American and worldwide Freemasonry to the members of the Grand Lodge of Bulgaria on June 30 and, on the following day, July 1, to the same Brothers plus guests, including journalists from five Bulgarian newspapers.

M.W. Stavrev’s personal representative met the Degree Team at the airport, escorted them into the VIP lounge, and had their passports and baggage processed. After settling into their rooms at the Kempiaski Hotel Zografski in Sofia, they then gathered in a spacious conference room which had four large TVs for viewing parts of some of the Masonic videos previously mentioned. When the meeting began, M.W. Ivan Stavrev made the introductions, Ill. Woodward gave a short presentation concerning the purpose of the visit, and Ill. Boyd introduced all the American, German, and Portuguese Brethren attending.

Then Ill. Saint, the guest speaker for the occasion, thanked the Grand Master in the name of the ACGL and the Supreme Council, 33°, for the invitation to come to Bulgaria and for the opportunity to assist him and his Grand Lodge by providing information about the origins and purposes of Freemasonry. This comprehensive presentation revealed how the universally accepted landmarks of Freemasonry would be of value to every member of the Grand Lodge of Bulgaria and the good people of their country. This presentation was followed by a fine late dinner and warm fraternal fellowship.

On Saturday morning, the Brethren were transported to the beautiful Grand Lodge building, located at the foot of Viotosha Mountain. The property, only recently built by the Grand Lodge, has impressive Gothic-style windows and is used by five Lodges for their meetings. A beautiful and excellently designed building, it met every requirement for the conferral of the Degrees. Everyone did a superb job, especially Ill. Boyd as Class Director; Ill. Solis in charge of the five Obligatory Degrees; and Ill. Saint as General Secretary. Following lunch, the Degrees were completed, and Ill. Elmer C. George, 33°, conducted a Cold Sands Ceremony for four candidates for the Shrine prior to departure from the Lodge. Then the Brethren were transported back to the hotel.

For Saturday evening’s talk on Freemasonry, the conference room was equipped with translation capabilities from a booth behind and above the conference room. Many guests were in attendance along with eight representatives from the press. Pamphlets and brochures from the MSA/MIC, MRC, and the Scottish Rite, S.J., were given to the press. Again, Ill. Saint gave a fine presentation followed by a Q&A session which was very informative for all attending, especially for the reporters.

Freemasonry, the ACGL, and the Scottish Rite, S.J., made very favorable impressions on everyone in Bulgaria and on those who read the newspaper articles covering this event. Freemasonry’s reputation as a law-abiding group made up of men of good will was proven. Dinner and fellowship concluded this historic day.

On Sunday morning, the Brethren were treated to a tour of Sofia that culminated with a visit to St. Alexander Nevski Cathedral Stauropigual Memorial Church. The Bishop, a young man of 43 who is a Master Mason, gave a private audience to the Brethren, took them personally on a tour of the church, made a presentation to each Brother, and posed for pictures with the group. In turn, Ill. Saint presented the Bishop with a high quality leather billfold with the ACGL logo on it. That afternoon, the visiting Brethren were transported to the airport and given a warm fraternal goodbye before returning safely to their homes. Prior to departing, Ill. Bros. Woodward and Guia had more meetings with the Grand Master of Bulgaria.

It is a rare occasion when Freemasonry has the opportunity to spread Light in a former East Block country and to have that Light received so positively. It is even rarer that such efforts result in positive reviews by the press. Yet both happened in Bulgaria. Five newspapers, evidencing the freedom of the press in Bulgaria, reported fairly and accurately on the Masonic events. This signals a significant start towards more freedom for all Bulgarians. We are sure that the Masons there, including the 34 new Scottish Rite Brethren, will be active in making that increased freedom a reality.

Donald L. Saint
was raised in U.S. Hessen Lodge No. 844, Darmstadt, Germany, in 1967, and is also a member and Past Master of Friends of the Lahn Lodge No. 860, Giessen, and of Oregon Military Lodge No. 936, Frankfurt. A 32° member of the American Military Scottish Rite Bodies since 1967, he has served in many offices, including Recorder and Assistant Secretary, and was invested with the K.C.C.H. in 1991 and coroneted a 33° in 1995. Licensed as a minister and then trained in management, his life career has been in the U.S. Army, from which he retired in 1982.