(20150528) TO ALL GRAND LODGES IN AMITY: IMPORTANT INFORMATION – CURRENT STATE OF FREEMASONRY IN BULGARIA 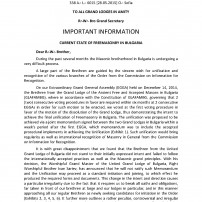 TO ALL GRAND LODGES IN AMITY

CURRENT STATE OF FREEMASONRY IN BULGARIA

During the past several months the Masonic brotherhood in Bulgaria is undergoing a very difficult process.

A large part of the Brethren are guided by the sincere wish for unification and recognition of the various branches of the Order from the Commission on Information for Recognition.

On our Extraordinary Grand General Assembly (EGGA) held on December 14, 2014, the Brethren from the Grand Lodge of the Ancient Free and Accepted Masons in Bulgaria (GLAFAMBG), where in accordance with the Constitution of GLAFAMBG, governing that 2 (two) consecutive voting procedures in favor are required within six months at 2 consecutive  EGGAs in order for such motion to be enacted, we voted at the first voting procedure in favor of the motion of the dissolution of the Grand Lodge, thus demonstrating the intent to achieve the final unification of Freemasonry in Bulgaria. The unification was proposed to be achieved via a joint memorandum signed between the two Grand Lodges in Bulgaria within a week’s period after the first EGGA, which memorandum was to include the accepted procedural implements in achieving the Unification (Exhibit 1). Such unification would bring regularity as well as international recognition of Masonry in General from the Commission on Information for Recognition.

It is with great disappointment that we found that the Brethren from the United Grand Lodge of Bulgaria did not stand to their initially expressed intent and failed to follow the internationally accepted practices as well as the Masonic grand principles. With his decision, the Worshipful Grand Master of the United Grand Lodge of Bulgaria, Right Worshipful Brother Ivan Sariev, has announced that he will not ratify such Memorandum and the Unification may proceed as a standard initiation and joining, to which effect he produced the required forms and documents. This change in the intent and direction causes a particular irregularity due to the fact that it requires us to break all oaths and obligations, far taken in front of our brethren at large and our lodges in particular, and in this manner approaching all our regular Brethren as newly seeking candidates for initiation in the Order (Exhibits 2, 3, 4, 5, 6). It further more outlines a rather peculiar, controversial and irregular procedure which suggests that on the same day at the same ceremony, all newly joining Brethren will be consecutively Initiated, Passed and Raised and also invested in their respective offices in our lodges.

Further to our dismay, we were asked to give up all possibility to deepen our Masonic knowledge by prohibiting us to improve by participating in constructing process of the Temple through joining The Supreme Council, 33° of the Ancient and Accepted Scottish Rite of Freemasonry in Bulgaria, by signing documents which are to blow away our freedom and designed to infringe our dignity as persons and our Masonic Honor (Exhibit 4). The consequences of such acts are clear – the brethren from  the United Grand Lodge of Bulgaria (inclusive of the Past Grand Officers) who are attending the lodges of instruction practicing the Ancient and Accepted Scottish Rite in Bulgaria will be judged at the Grand Masonic Tribunal for dismissal from the Order in general.

It is to our regret that the opportunity for unification and regularization of Freemasonry in Bulgaria had to be amiss on this occasion. We will continue to work with all our strength and abilities towards establishing the harmony which should at all times characterize Freemasons between the Masonic Grand Lodges in Bulgaria including the Grand Lodge of the Ancient and Accepted Scottish Rite in Bulgaria and the United Grand Lodge of Bulgaria in accordance with the Ancient Rules and Tenets and maintaining every Mason’s honor and freedom.