(20091201)Information on the Masonic Work of the Grand Lodge A∴F∴A∴M∴ of Bulgaria and our incommutable aspiration for Regularity, Recognition and Unity of Bulgarian Craft 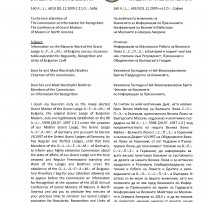 Subject:
Information on the Masonic Work of the Grand
Lodge A∴F∴A∴M∴ of Bulgaria and our incommutable
aspiration for Regularity, Recognition and
Unity of Bulgarian Craft

Dear Sir and Most Worshipful Brother
Chairman of the Commission,

I deem my bounden duty as the newly elected
Grand Master of the Grand Lodge A∴F∴A∴M∴ of
Bulgaria, the original Grand Lodge of Bulgarian
Masons, duly and legitimately established on the 88
A∴L∴ 5998 [20.07. 1997 C.E.] under the auspices
of our Mother Grand Lodge, the Grand Lodge
A∴F∴A∴M∴ of Germany and pursuant to Decree
VI/1997 of the United Grand Lodges of Germany, by
five Regular and Perfect Lodges, until that time
Members of the G∴L∴A∴F∴A∴M∴ of Germany,
to inform your highly esteemed Commission about
the state of affairs of our Grand Lodge and the truly
devoted and Regular Freemasonic standing and
Work of the Lodges and Brethren under the
obedience of the G∴L∴A∴F∴A∴M∴ of Bulgaria.
And therefore I beg for your attention allowing me
to appear before the Commission on Information
for Recognition at the occasion of the 2010 Annual
Conference of Grand Masters of Masons in North
America and ask you to dedicate few minutes of
your precious time to consider our Grand Lodge’s
aspiration for Regularity, Recognition and Unity of
Bulgarian Craft.

As of present day 51 Member Lodges are Working
under the obedience of our Grand Lodge and our
membership count is approaching 2,000. Brethren.
The by far overwhelming majority of our Brethren
are active members, as the Constitution of
G∴L∴A∴F∴A∴M∴B∴ does not provide for a
passive form of membership (except for a
temporary Sleeping membership). Those are free
and honourable men truly devoted to the Craft.

A new generation to lead the Grand Lodge

Notably the newly elected Board of Grand Officers
shows a shift of generations in our Grand Lodge. A
majority of my Grand Officers as myself, belong to a
generation of Brethren, who were Initiated after
the schism of the 6000 A∴ L∴ [the year 2000 C.E.] and who are therefore neither part, nor burdened
by the quarrels of the past that lead to the split of
the Bulgarian Brotherhood. Although we are firmly
committed to strictly follow the Ancient Customs
and Usages of the Regular Freemasonry as set out
in the Ancient Landmarks, the Old Charges and the
Constitution of G∴L∴A∴F∴A∴M∴B∴ that was
drawn after the Constitution of our Mother Grand
Lodge, the G∴L∴A∴F∴A∴M∴ of Germany, we
see the priorities of our Grand Lodge in a new Light.
In particular we lay special emphasis on the
harmony in the Craft which we see in a future Unity
with our beloved Brethren from the United Grand
Lodge of Bulgaria, rather than persisting in a
widening schism. The goals and guiding principles I
and my Grand Officers will follow, have been
outlined in a Mandate Stone laid down befeore the
Grand General Assembly. Giving their votes to elect
me and the new Board of Grand Officers, the
Lodges’ representatives approved this underlying
program for the next two‐years term of our office.
A copy of this Mandate Stone will be submitted to
your attention attached hereto and shall not go
into further details of my and my Grand Officers
views and goals.

G∴L∴A∴F∴A∴M∴B∴ and
the Recognition Standards

The history of the Freemasonry in Bulgaria after the
Craft Work was restored A∴L∴ 5998 [1997 C.E.] in
our Grand Lodge and in particular the reasons and
consequences of the schism of A∴L∴ 6000 [2000
C.E.] have been explained several times before your
esteemed Commission and I am not going to revert
again to these facts.

The fact remains that the G∴L∴A∴F∴A∴M∴B∴
is the original Grand Lodge in Bulgaria and recognized
by a number of U.S. Grand Lodges before the
U∴G∴L∴B∴, which came into existence much
later, sought recognition from these U.S. Grand
Lodges. That the U∴G∴L B∴ had not sought
permission from our Grand Lodge to be recognized
by U.S. Grand Lodges sets a precedent of inconsistent
application of the principle of territorial sovereignty
continuously applied by the Commission on
Information for Recognition. In point of fact, the
Recognition of G∴L∴A∴F∴A∴M∴B∴ by a number
of Grand Lodges of North America, being duly
confirmed by means of exchange of Recognition
documents and bilateral appointment of representatives,
has been silently and groundlesslly renounced,
even without any voicing or notice to our
Grand Lodge. And the U∴G∴L∴B∴ has been Recognized
by U.S. Grand Lodges in collision with, and
seriously undermining the territorial souvereignity
principle as well as the mere underlying principle of
preservation of Masonic justice laid down by the
Thirteenth Landmark.

All these facts, arguments and proofs to show that
the G∴L∴A∴F∴A∴M∴B∴ meets the Recognition Standards established by your esteemed Commission,
have been produced in full length before you
by my predecessor, the M∴W∴ Past Grand Master
Br∴ Nikola Alexandrov, and I am not going to
elaborate upon details.

Considering petitions put forward before you, your
honoured Commission confirmed that mere fact
that in Bulgaria «it appears that both Grand Lodges
use the same ritual and generally practice the same
Masonry, but attempts to unify the two groups
have been unsuccessful» (Commission’s 2006
Report) and «that even though a Grand Lodge may
practice regular Masonry, we only determine
whether the Grand Lodge meets all the standards
for recognition» (Commission’s 2008 Report).

We precisely understand the position of the Commission
on Information for Recognition stated in
Commission’s 2009 Report that although G∴L∴
A∴F∴A∴M∴B∴ is known to practice Regular
Masonry, it does not meet the Standards for Recognition
due to the territorial souvereignity concept
and the fact that the U∴G∴L∴B∴ is broadly
Recognized and in amity with an overwhelming
number of Grand Lodges in North America and
throughout the world. Therefore we are not putting
forward a request the Commission to consider the
Recognition of our Grand Lodge as being the proper
Masonic authority for Bulgaria, but we beg for
Commission’s support for the appointment of
international mediators who could facilitate the
unification of the two separated Masonic obediences
in Bulgaria.

It is my position, supported by the Board of Grand
Officers and by the majority of my Brethren members
of G∴L∴A∴F∴A∴M∴B∴, that we need to
turn the page of the past and, having admited the
status quo, we should discontinue any further cavil
of argument who was right and what was unjust.
Having gone through this painful course of acknowledgment
of the reality, today we see the Unity
with our Brethren of the U∴G∴L∴B∴ that we desire
yet from the days of the split, as the proper
manner to deal with the matter of our international
Recognition.

As proclaimed in the Mandate Stone outlining the
priorities for the term of my service as the Grand
Master, «Unity remains the main goal of the Grand Lodge» A∴ F∴ A∴ M∴ of Bulgaria. But we do not
consider the pursuit of Unity a kind of bargaining,
but rather a discussion, based on the column of
Wisdom. And we will not accept humiliation We
would never allow for someone to treat the G∴L∴
A∴F∴A∴M∴B∴ Brethren as second‐hand Masons,
seeking «regularization», «wandering» or «homeless
» Masons, in any future joint formation of
the Bulgarian Craft.

We know that the Unity is an internal matter of the
Craft in Bulgaria, that has to be resolved between
our Brethren from the U∴G∴L∴B∴ and ourselves.
And we more than desire to enter into particular
and constructive discussion with the U∴G∴L∴B∴
And in my opinion such discussion won’t last long, if
the U∴G∴L∴B∴ would share our aim to reunite
the Brotherhood. Because there are no major
differences concerning the fundamental principles
of Masonry, but the outstanding issues to be solved
are of a more or less matter of organization,
proceeding and resolution of problems auxiliary to
the Craft.

The need for impartial mediation

As your esteemed Commission has been informed,
for many years we fail to even start a discussion
because our formal invitations addressed to U∴
G∴ L∴ B∴, remained unanswered. Therefore we
feel, we need international mediation that should
facilitate the mere summoning of a meeting
between the U∴ G∴ L∴ B∴ and the G∴ L∴ A∴
F∴ A∴ M∴ B∴ and should assist both parties to
set‐up a roadmap to unity.

The 2009 Commission Report fairly mentions that
«the services of several impartial mediators were
offered to facilitate the process» for which «the
Commission again strongly encouraged the two
Grand Lodges to actively meet and work toward the
resolution of their differences». But in fact no
mediation has ever taken place. As evident from
the Supplemental Report to 2009 Commission
Report the last group of impartial mediators never
met any Officer or representative of the G∴L∴A∴
F∴A∴M∴B∴ and they only discussed with U∴G∴
L∴B∴ their position, repeating same «unusual
demands on the part of the United Grand Lodge of
Bulgaria» (2008 Commission Report) which for
years prevented U∴G∴L∴B∴ from even meeting
us.

Therefore I believe, a new attemt for effective
mediation between the two split organizations of
Bulgarian Masons is worth the effort of the
international Massonic community. I hope that the
Brethren the Commission might propose to be
appointed mediators who would at least meet both
parties. On behalf of the Grand Lodge A∴F∴
A∴M∴ of Bulgaria I promise that our delegation
will be ready to meet the mediators and a delegation
or representative of the U∴G∴L∴B∴ any
time at any place of our Brethren convenience.

An option for mediation that, I think, should be
considered, would be the involvement of Grand
Lodges as mediators for our unification discussions
with the U∴G∴L∴B∴, rahther than particular
experienced Brethren. I would be glad, having in
mind their success as mediators in the past, if the
the U∴G∴L∴ of England would kindly take this role
in Bulgaria, too. Undisputedly the involvement in
the mediation process of our Mother Grand Lodge,
the G∴L∴A∴F∴A∴M∴ of Germany as well as a
North American Grand Lodge would be of great
assistance.

I know that the Unity of the Bulgarian Craft is the
ultimate solution for the controversial issue of the
Recognition of the Grand Lodge A∴ F∴ A∴ M∴ of
Bulgaria, and I feel that the long lasting schism of
Bulgarian Masonry is close to an end. Therefore I
trust that your esteemed Commission will once
again set an example for Massonic tollerance and
endorsing our desire for Recognition and Unity with
our beloved Brethren from the U∴G∴L∴B∴ will
support our petition for international support and
mediation for this process,

for the Glory of the Great Architect of the Universe!