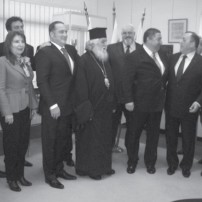 They all shared that they were united by one common cause – to help the distressed and suffering Haitian people. A donation campaign and fundraising among the members of their organizations has started, which will be transferred to the BRC fundraising account.

N.P. Rumen Ralchav, in his address, said: “Despite the differences in the philosophies we profess, humanity, charity, has gathered us here. Today we combine the traditions that the Bulgarian Red has and our opportunities. The reason is Haiti, but a new thinking about donation must be born here. “

N.P. Plamen Minev shared: “This should be a forum to direct our common efforts. We need to unite not only this current cause, but to conclude framework agreements in order to be as useful and effective as possible in the non-governmental sector. We have many traditions in charity and we must work together and revive this genuine Bulgarian value. “

N.P. Archon Slavi Binev, a longtime donor to the BRC, addressed all those present: “Today we are uniting around a new morality and neglecting centuries-old problems between our organizations to help brothers and sisters in need. At the same time, we are helping people in Bulgaria find a good start in themselves, and people around the world to understand that Bulgarians are a compassionate and dignified people. “ His Eminence Metropolitan Dometian conferred the blessing on the universal endeavor of His Holiness the Bulgarian Patriarch Maxim and the support of the Bulgarian Orthodox Church and its Holy Synod. Grandfather Dometian told the parable of the Good Samaritan and also addressed: “It is an honor for me to welcome this noble initiative, for which we thank the Bulgarian Red Cross. The Red Cross is close to the cross of Christ – a symbol of faith and hope. The Holy Gospel says, “Blessed are the merciful, for they will be pardoned.” The Bulgarian Orthodox Church is the mother-nourisher of the spiritual values ​​of the Bulgarians. I urge all Bulgarian citizens, regardless of their religion and ethnicity, to support this good deed and to fit into the moral history of our people with another worthy gesture. “

Dr. Sofia Stoimenova told about the large-scale operation of the International Red Cross and Red Crescent Movement in Haiti, where over 10,000 volunteers of our international network are currently employed.

Mr. Hristo Grigorov closed the meeting with the assurance that our people this time will prove their moral virtues and will come out with dignity from the BRC’s campaign for the benefit of the victims in Haiti.