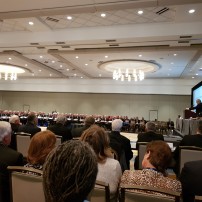 The Grand Lodge of the Ancient Free & Accepted Masons of Bulgaria took part at the annual Conference of Grand Masters of Masons in North America which was held in 2020 in the beautiful city of Louisville, Kentucky, USA. During the Conference the Most Worshipful Grand Master of GL AF&AM of Bulgaria Bro. Krasimir Martinov, the MW Past and Honorary GM Bro. Plamen Mateev, the RW DGM Bro. Miroslav Voutchkov had a number of meetings with Grand Masters from North America (USA, Canada, Mexico) as well as from other countries. Simultaneously the Conference of Grand Secretaries of North America also took place at which the Secretary for International Relations RW Bro. Dimiter Mandradjiev took part. The MW Bro. Krasimir Martinov, MW PHGM Bro Plamen Mateev, RW DGM Bro. Miroslav Voutchkov and RW Bro. Dimiter Mandradjiev took part in all the workshops and seminars on different topics and also had discussions on various issues of freemasonic history with Brothers from different Grand Lodges. The logistics and organization of both Conferences was a a very high level with a cultural program during the evening events.

The representatives of the GL AF&AM in Bulgaria also submited on paper and via e-mail an INFORMATION DOCUMENT UPON PRESTIGE INFRINGEMENT AND DISCRIMINATION AGAINST FREEMASONRY. The GL AF&AM in Bulgaria also took part as part of the information booth of NUGLB (National United Grand Lodges of Bulgaria – an association of regular Grand Lodges in Bulgaria). At the info-booth we managed to distribute invitations for the annual International Freemasonic Conference (more here: http://www.grandlodgebulgaria.org/bg/?p=5611&lang=en). The IFC was also presented with Report booklets upon what we have done in the last edition. Also we gave out brief schematic posters of the hisotry of freemasonry in Bulgaria for the period 1992-2018. Leaflets and flyers with information for our freemasonic temples and halls were also handed out as well as information for how we support for more than 20 years the George Washington National Masonic Memorial in Alexandria, Virginia.

The Commission on Information for Recognition did not address issues or matters at its open sessions relating to the Jurisdiction of Bulgaria.