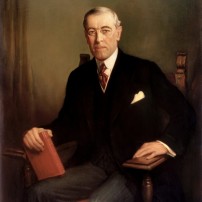 Honorable and dear Brethren, in 2019 the Commission for International Relations of the Grand Lodge of Ancient Free and Accepted Masons of Bulgaria received a proposal for the naming of a street in the capital city of the Repuplic of Bulgaria in honor of Thomas Woodrow Wilson – President of USA 1913-1921. In regards of the historical facts and with aim to show our respect, honor and gratitude towards the personality of President Woodrow Wilson and the people of the United States of America, thus the Commission at a regular meeting and with the valuable input of the MW Honorary GM (PGM) Bro. Plamen Mateev, finds this proposal valid and in harmony with the Masonic traditions. The Commission issues a recommendation and appeals to all Bulgarian Freemasons in the jurisdiction of Bulgaria, as part of the 4 Grand Lodges in it, to support this proposal by signing the public petition, located at the following web-address:

THE PETITION CAN BE FOUND HERE

The Commission views the current idea as a lawful and needed for the Republic of Bulgaria.

Thomas Woodrow Wilson is the twenty-eighth (1913 – 1921) president of the United States. Prior to his presidency, he was a Doctor of History and Political Science (since 1883) at Jones Hopkins University, a Visiting Lecturer at Cornell University, Professor of Law and Political Economy at Princeton University (since 1890). ) and was President of Princeton University in 1902 and was elected Governor of New Jersey in 1912 (1911 – 1913). Makes effective antitrust antitrust legislation, supports women’s suffrage, statutorily reduces the interest rate on loans for farmers, introduces measures to ban child labor and a law to create a system of work benefits, statutorily increases wages and improves working conditions for women. railway workers, strengthens and expands the army and navy, raising funds through a new building tax and raising the profit tax.

He is the second Democrat to serve two consecutive terms in the White House (the first being Andrew Jackson), with his term associated with the country’s entry into World War I.

At the peace talks in 1919, US President Woodrow Wilson upheld the stay of White Sea Thrace, South Dobrudzha and Tsaribrodsko in the Bulgarian state borders [1] and thwarted the plan to liquidate Bulgaria as a state and divide it into three subordinate regions to Greece, Serbia and Romania, launched in Neu [2] [3] [4] [5]. He is a 1919 Nobel Peace Prize winner.