(20190911-16) GL of AF&AM of Bulgaria at ritual work, exchange of recognitions and celebrations for the 75 years anniversary of the consecration of the Grand Orient of Minas Gerais in the City of Belo Horizonte, Brasil (+GAL) 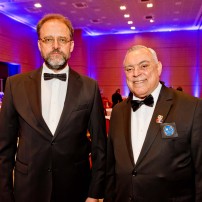 After a special invitation from the Grand Orient of Minas Gerais (GOMG), a representative of the GL AF&AM of Bulgaria, the RW Grand Orator Bro. Alexander Lazarov, visited the city of Belo Horizonte in the period September 11-16, 2019.

On September 13, a festivity event was held for the 75th aniversary if the consecration of the Grand Orient of Minas Gerais (September 12, 1945). There were a couple of hundred Brothers accompanied by their sisters.

With the celebrations for the 75 years anniversary, another year was added to the successful activities of the GOMG. A book was presented that shows the history and success of the Orient. One of the successes is the freemasonic periodical magazine which aims to inform that build stronger freemasonic communities with the other Orients. Another important point during the ceremony was the commemorative postage stamp in honor of the anniversary. The stamp itself shows one of the most beautiful images of Minas Gerais – the mountain.

Another book was also presented: “Builders of the new time”, written by the Grand Master Lazaro Emanuel Franco Salles. The book explains the activities of the 10 Grand Masters that have been at the top of the Orient which now comprises of 224 lodges in Minas Gerais.

The Grand Master of GOGM 0 Jose Humberto Bahia opened the ceremony in the Ball room of Actualno Hotel and expressed gratitude to all the guests that had come to pay tribute to the event. He also honored the Grand Masters and representatives from Paraguay and Bulgaria who were treated as official guests.

The Grand Master Bahia gave information about the activities of the Orient and played a movie about the Grand Orient of Minas Gerais. With the GM of GOMG – José Humberto Bahia, the GM of GLMG – Edilson De Oliveira, the GM of GO of Parana – Rubens Martins Juniors, the Grand Senior Warden of GLMG – Sergio Guimaraes, the Secretary of the International Affairs of the GLMG – Wilson dos Santos Filo (left-to-right – the 3rd – the RW Grand Orator of GL AF&AM of Bulgaria Bro. Alexander Lazarov)

During the event many important treaties and agreements were signed between Regular Lodges of the main Brazilian freemasonic entities (The Grand Orient of Brazil – GOB, The Symbolic Freemasonic Confederation of Brasil – CMSB, and the Confederation of Freemasonry in Brasil – COMAB). During the official agenda the GM of the GOMG received from the guests plaquets, presents and souveniers. On behald of the Grand Master and the Grand Lodge of AF&AM of Bulgaria, an orthodox christian icon of St, John the Baptist was presented. With the Grand Master of GOMG – José Humberto Bahia On September 14 an official open to the public ceremony was carried out for the reason of presenting awards to the Brothers who have done a great job for the fraternity. The ceremony was in the main freemasonic hall. At the ceremony as a representative of the GL AF&AM of Bulgaria was Bro. Alexander Lazarov, Grand Orator. At the ceremony was the official signing of the treaty for mutual recognition. The official guests at the 75 years anniversary of the GOMG
The GM of GLMG – Edilson De Oliveira, the VGM of the GOMG – Vanderlei Aceis, The President of COMAB – Ademir Lucuis de Amorim, the GM of GOMG – Jose Humberto Bahia, the GM of Ad0Vitam – Lazaro Emanuel Franco Salles, the General GM of the Grand Orient of Brazil – Mucio Boifacio, representative of GL AF&AM of Bulgaria – Alexadner Lazarov.

After the ceremony presents were exchanged and many photos were taken