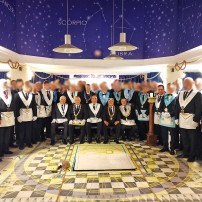 On June 24, 2019 a Grand Lodge Meeting was organized for the purpose of the elected Grand Master to be sworn in together with his Grand Officers.The event took place in the first temple of freemasonry in Bulgaria – the National Freemasonic Hall that is the birth place of GL AF&AM of Bulgaria. In this temple once again the Brethren from all over Bulgaria gathered in order this time to initiate an even more successful 6020 AL year. The rite that was carried out focused on the ancient action of handing the hammer of the current Grand Master MW Bro. Plamen Mateev to the elected GM MW Bro. Krasimir Martinov. The work of the Grand Lodge was governed by the Past Grand Master Bro. Rumen Ralchev. After sworing in the new Grand Master, the Grand Lodge declared the Past Grand Master Bro. Plamen Mateev as Honorary Grand Master of the GL AF&AM of Bulgaria to govern the international activities.

All Brethren applauded and welcomed the freshly arrived Recognition from the GL of AFAM of British Columbia and Yukon, Canada. A number of greeting letters were received from all around the world.