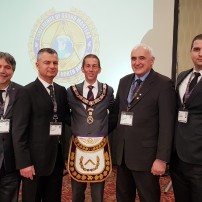 The Grand Lodge of the Ancient Free & Accepted Masons of Bulgaria took part at the annual Conference of Grand Masters of Masons in North America which was held in 2019 in the beautiful Rappid City, South Dakota. During the Conference the Most Worshipful Grand Master of GL AF&AM of Bulgaria Bro. Plamen Mateev had a number of meetings with Grand Masters from North America (USA, Canada, Mexico) as well as from other countries. Simultaneously the Conference of Grand Secretaries of North America was active at which the Secretary for International Relations RW Bro. Dimiter Mandradjiev took part. The MW Bro. Plamen Mateev and RW Bro. Dimiter Mandradjiev took part in all the workshops and seminars on different topics and also had discussions on various issues of freemasonry with Brothers from different Grand Lodges. The logistics and organization of both Conferences was a a very high level with a great cultural program during the evening events.

The Commission on Information for Recognition did not address issues or matters relating to the Jurisdiction of Bulgaria.