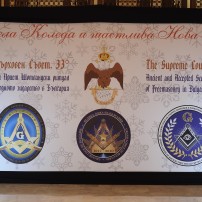 On December 16, 2018, the annual Christmas Ball of Freemasons in Bulgaria (Masonic Christmas Ball) took place in HOME NUMBER 2 part of the government residence Boyana in Sofia city. The festive program included greetings, music, traditional freemasonic Christmas activities (lottery and auction) as well as surprises according to Bulgarian Christmas customs. We are all united in our thoughts and actions in the name of the Bulgarian society, the freemasonry of the world and the glory of the G∴A∴U∴. The brothers were accompanied by the sister. Brothers from the 6 Freemasonic structures in o. Bulgaria (The Jurisdiction of Bulgaria) took part (Grand Lodge of Ancient Free & Accepted Masons in Bulgaria, Grand Lodge of Ancient and Accepted Scottish Rite of Bulgaria, the United Grand Lodge of Bulgaria, Grand Lodge of Bulgaria, The Supreme Council, 33° of the Ancient and Accepted Scottish Rite of Freemasonry in Bulgaria) and also brothers from foreign Grand Lodges and special guests from the Bulgarian Red Cross and Rotary International. This reaffirmed the wish of the Brothers coming from different structures to promote the NUGLB (Nationally United Grand Lodges of Bulgaria) as part of the concept of Shared United Bulgarian Orient.