(20180220) PRESS-ANNOUNCEMENT: Report of the CIR at the 105th Annual Conference of Grand Masters of Masons in North America 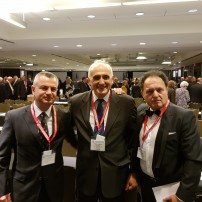 On February 20, 2018, the Report of the Commission on Information for Recognition of the 105th Annual Conference of Grand Masters of Masons in North America was presented and adopted. The Commission did not hold a hearing for Bulgaria and therefore there was no matter concerning the jurisdiction directly. The 3 Grand Lodges in Bulgaria, united in the National United Grand Lodges of Bulgaria (NUGLB), submitted a letter before the  deadline of 1st of December 2017 that indicated the efforts of the Bulgarian Freemasonry is in line with the recommendations that the Commission has made to the Bulgarian freemasonry for the continuation of the process of unification and harmonization of the Bulgarian Freemasonry. The letter included the signed agreement on jurisdiction sharing as well as the formation of the NUGLB alliance – points that are in harmony with the recommendations made 2 years ago, as well as information about the 100 years of organized Freemasonry in Bulgaria, as well as the initiatives and projects including MERT, MCO and MPSA, as a replication of the mainstream activities of North American Masonry towards the public.

During the committee sessions, the long-standing rapporteur for Bulgaria, the VW PGS Br. Thomas Jackson himself said he did not accept reproaches and suggestions that he had taken bribes in the form of financial instruments (money) to lobby for one or another Grand Lodge or group. He also quoted that “the amount of $ 10,000” is an insult to him because the same, according to him, is related to being given him. There was no accusation against him during the plenary meetings of the Commission, and the brothers were astonished at this reaction.

Subsequently, another brother, Grand Master and the Royal Lodge of Florida, clarified that he did not accept and did not find adequate the methods and tools the Commission handles for the Recognition Information due to lack of sufficient budget, time, and insufficient depth in auditing of the work of one or another Grand Lodge in the world, calling for this to change because the Commission’s opinions are being used for other purposes by the consultants on the relevant cases and the Grand Lodges that are investigated around the world.

An interesting case for the audience was the consideration of Liechtenstein’s Grand Lodge, in which membership status and position of Grand Secretary holds Bro. Savino Batanov. The matter, which was being discussed, was addressed by the MW GM of United Grand Lodges of Germany Bro. Christoph Bosbah that Bro. Savino is excluded from membership from 3 Grand Lodges – the UGLsG, the Grand Lodge of Bulgaria and the United Grand Lodge of Bulgaria, and for the latter this fact was personally emphasized by the MW GM of UGLB Bro. Iskren Yotov. It was also reported that no decision was taken by the Nova Scotia Grand Lodge to bring light to Liechtenstein’s GL – something that was said by Bro. Savino in 2017 to the Commission. The Commission’s decision was that it did not find Liechtenstein’s GL as a regular practicing freemasonry entity.

GLAFAMBG, GLB and GLAASR will continue to work in support of the unifying movement in Bulgaria – the SHARED UNITED BULGARIAN ORIENT. The NATIONAL UNITED GRAND LODGES OF BULGARIA will continue to maximize their synergy in the light of the new precedents and the additional recommendations made by the Commission in similar cases, such as Paraguay retaining its open character for every Masonic structure in the name of our universal responsibility for the well-being of Bulgarian citizens, the country and Freemasonry.