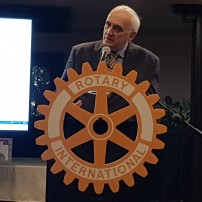 Dear Brethren, please find information and a video from the public lecture of the MW GM Bro. Plamen Mateev given at a meeting of Rotary Club Sofia Capital.

Today Rotary Club Sofia Capital hosted its 31st regular meeting for the Rotary year 2017-2018 at the Lebed r-t in Pancharevo district near the Pancharevo lake. The meeting was atteneded by numerous friends from the Club as well as from other Rotary clubs (RC Blagoevgrad, RC Varna Euxinograd, RC Veliko Tarnovo, RC Skopje West, RAC Sofia Tangra) and non-Rotarian guests. At the meeting we had the pleasure and honor to welcome as a guest speaker prof. Plamen Mateev, PhD being the Grand Master of the Grand Lodge of Ancient Free and Accepted Masons in Bulgaria (GL AF&AM in Bulgaria) – the authentic Grand Masonic Lodge registered in 1997 as a union of masonic lodges, successor of the Grand Lodge of Bulgaria with light brought by the Grand Lodge of Ancient Free and Accepted Masons of Germany (GL AF&AM of Germnay part of the United Grand Lodges of Germany) and successor of the first Grand Lodge of Bulgaria with light brought from the Grand Lodge of Jugoslavia. The meeting was very interesting and you can watch it as we have recorded a partial video-clip of it. The topic of the lecture was “Rotary and Freemasonry – similarities and differences”. Guest-speaker Mateev stressed upon the fact that this is his first visit and delivery of a speech, though the regular requests and invitations for such an event. During his speech he made a correlation between Rotary and Freemasonry in Bulgaria, but also in the world. Light was shed upon the differences. The speech was approximately 50 minutes and then another 70 mins. followed during a Q&A session. To conclude the meeting, the President of the Rotary Club Sofia Capital, Mr. Dimiter Mandradjiev, expressed sincere gratitude from the hosting Rotary Club and provided as a present to the guest-speaker a special Rotary Club necktie.

The article “(JAN 31) Meeting 31 with guest-speaker the Grand Master Plamen Mateev (+GAL) (+VID)” is published on the webpage of Rotary Club Sofia Capital with a video file. The information is taken from www.rotaryclubsofiacapital.org.

To be publsihed soon