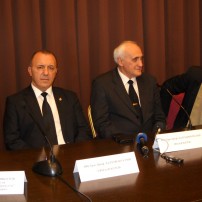 An international conference on “Masonry and Society” will be held in September next year in Bulgaria on the idea of ​​the Grand Lodge of Cuba – Prof. Plamen Mateev announced in Varna – Grand Master of the Grand Lodge of Ancient Free & Accepted Masons of Bulgaria. According to Professor Mateev all over the world, the Masons work to help overcome disaster damage, take care of reducing aggression and addictions among adolescents, and increasing the number of youth engaged in sports.

He announced that from 4th to 9th December with the participation of craft lodges in some of the Bulgarian schools started the training of students with the free game “The Time of the Code”:

Prof. Dr. Rumen Ralchev – Past Grand Master, arch. VENELIN Zhechev – first lodge master of the craft lodge “Chernomorski Priyateli” and Nikola Nikolov – lodge master of H.M.L. “Chernomorski Priyateli”, stated that one of the aims of the Masons in Bulgaria is the return of the civilized dialogue in the Bulgarian society. It has become clear that the Masons continue to insist that the text in the Judicial System Act, in which membership of the Masonic Lodge, is subject to a declaration to the Supreme Judicial Council, should be changed.

The article “Conference gathers masons from all over the world in Bulgaria in 2018” is published on the webpage of Bulgarian Nationa Radio with author Daniela Stoyanova with a partial interview and audio file. The information is taken from bnr.bg.