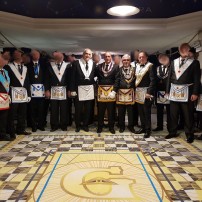 Today, October 15, 2017, in The National Freemasonic Hall “Gorna Banya” (the hall in which the GLAFAMBG was consecrated and light was brought by the GL AFAM of Germany, part of the United Grand Lodges of Germany) a festive ritual was held according to the Ancient and Accepted Scottish Rite in the presence of the Grand Ceremony Master and the Grand Secretary of the Grand Lodge AFAM of Cuba. The ritual was a mutual one between the GL AFAM in Bulgaria and the GL of Bulgaria. During the ritual, 2 brothers were officialy presented for liasons to represent the GL of AFAM of Cuba for the 2 Bulgarian Grand Lodges. All of the guests were presented with gifts and also gifts were send to the Brothers in Cuba. Part of the gifts were Volume 1 of the book “Freemasonry in Bulgaria” authored by the PGM MW Br. Rumen Ralchev, who personally donated the books for this occasion. The guests also gave gifts. On this day The Grand Lodge of AFAM in Bulgaria and the Grand Lodge of Bulgaria received recognition from the Grand Lodge of AFAM of Cuba.