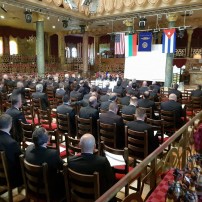 On October 14, 2017 in “Kaloyanova Krepost” complex in the village of Arbanasi, near the old-capital city of the 2nd Bulgarian State – City of Tarnograd, an official ceremony marking the 100 years of organized Freemasonic activities in Bulgaria was held (100 years of the official start of the first Grand Lodge of Bulgaria). The festivities were organized by The Grand Lodge of Ancient Free & Accepted Masons of Bulgaria (The Mother-Grand Lodge), The Grand Lodge of Ancient and Accepted Scottish Rite of Bulgaria and The Grand Lodge of Bulgaria. The events gathered more than 400 Brothers from all  Grand Lodges in Bulgaria and from abroad. Official foreign guests came from Cuba (The GL of AF&AM of Cuba) and USA (GL of Aliaska and GL of California). Greetings were sent from Brothers in GLs in Serbia, Italy and other states. The event included a festive ritual work with handing of recognition letters from the Grand Lodge of Cuba to the 3 Bulgaria Grand Lodges, who organized the event. Also there were discussion panels and discources held on freemasonic topic. Information upon the collaboration with The Bulgarian Red Cross and The Supreme Council, 33° of the Ancient and Accepted Scottish Rite of Freemasonry in Bulgaria. A couple of craft lodges signed brotherhood twinning agreeements. Also the position that the united Bulgarian Freemasonry is a result of the work between Brothers in the State of Bulgaria on topics of national and social importance, and not so much due to the idea of one or another commission or other type of structure that states which Grand Lodge is applicable to receive a recognition or not, because this type of information is not a uniting cornerstone, but rather a barrier between the Brethren and the logdes in Bulgaria