(20170617) Brothers from Ehnaton Lodge With Festive Gathering and Ritual in the Highlight of St. John Day 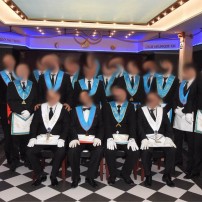 Today the Brothers working in the craft lodge Ehnaton part of the Grand Lodge of Ancient Free & Accepted Masons of Bulgaria had a festive gathering and ritual work in order to close the New Year. During the ritual work which went from 1st degree through 2nd degree and to 3rd degree, were voted and passed papers and reports on different issues concerning the work in the craft lodge. One 2nd degree Brother was raised to a Master degree due to his efforts and energy he had been putting during the passed 2 years. Special guests were the Very Worshipful Vice-Grand Master Bro. D.R. and the Very Worshipful Master of Ceremonies Bro. S.K.

A report was made about the work done so far for the festive event for the 10 years anniversary of craft lodge Ehnaton which will take place on October 19, 2017 in the Sheraton Balkan Hotel in Sofia. At this event an inivitation for all brothers who have started their Freemasonic journey will be isssued as well as for all other brothers from all GLs in Bulgaria and abroad. At the festive gathering it is expected 150 brethren from which 80 will be Brothers who are or who have been part of the the Ehnaton lodge – one of the most esotheric lodges in Orient Bulgaria. A photo and video retrospection as well as speeches from the Brothers who have been the key figures in the history of the lodge are also part of the agenda of the meeting. Until this moment more than 100 Brothers work in Ehnaton craft lodge of other CLs. Beloved Brothers, please mark the day October 19, 2018 in your calenderas.

By tradition the meeting of the craft lodge was in Plovdiv – National Freemasonic Home of The Supreme Council, 33° of the Ancient and Accepted Scottish Rite of Freemasonry in Bulgaria (Temple of the SC33°AASR of Bulgaria).