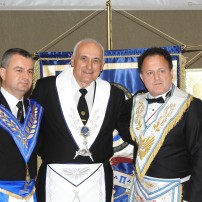 On June 18, 2016 in the orient of Plovdiv a ceremony for the founding of the union “National United Grand Lodges of Bulgaria” was held. The new freemasonic entity is a result of the mutual work of The Grand Lodge of the Ancient Free & Accepted Masons of Bulgaria, The Grand Lodge of the Ancient and Accepted Scottish Rite of Bulgaria and The Grand Lodge of Bulgaria. The union aims to work for the development of the idea for a SHARED UNITED BULGARIAN ORIENT (SUBO) and is a step forward towards its accomplishment. This important gathering was of more than 300 Brethren from different craft lodges from across the state of Bulgaria. The three MW Grand Masters signed a treaty for the founding of the union and in this way they also exchanged mutual recognitions between the 3 Grand Lodges. Special guest of the event was the Supreme Grand Commander of the Supreme Councill 33 of the AASR of Bulgaria – MIO Bro. Petar Kalpakchiev.